Event Report: An African Answer to an African Problem 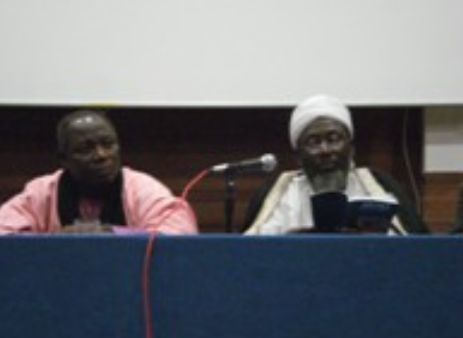 On the 12th of November, a new documentary, ‘An African Answer’, featuring the reconciliation work done in Kenya of Imam Ashafa and Pastor James from Nigeria, was screened in London.  Those not familiar with the ‘The Imam and The Pastor’, will be struck by their story.  Emerging from the 1990s in Northern Nigeria after being in the frontlines of confrontations between Christians and Muslims which saw the killings of thousands in inter-religious warfare, Imam Ashafa and Pastor James are two of the most unlikeliest of allies, forging new grounds with their   Interfaith Mediation Center, responsible for mediating peace between Christians and Muslims in Nigeria’s Kaduna state.

Once bitter enemies, determined to kill each other (The pastor had his hand hacked off while defending his church against Muslims and the imam had his spiritual adviser and two of his brothers killed by Christian extremists), the two men are now embarking upon an extraordinary journey of healing and forgiveness.   Through talking to each other, they questioned the cost of the violence finding passages in the Bible and the Koran which showed common approaches of working together and more importantly started teaching about it to others, despite staying faithful to their religion.

In fact it is this demonstration of the importance of staying faithful to one’s own religious principles whilst reaching out to others of a different faith, is what has been the appeal of their story over the last decade or so.  This and the fact that their solution is a home grown solution that has not had any external influences, means they talk not only with credibility but with a refreshing sense of uniqueness.  This credibility is important especially for a continent that has suffered from being told how to solve its problems rather than being provided with a space and facilitation in order to solve the problem for itself.

An African Answer is a continuation of their story and how they have now transferred those skills outside of Nigeria, to helping the people in Kenya in the aftermath of the electoral violence  in 2007.  The video is a powerful testament to the fact that people in the developing world or the global south pretty much know how to solve their own problems if they can be provided a space to do so.

This is not just something that should be left to the politicians or the institutions but really no one can be ruled  out having a part in contributing to the solution of a conflict.

Imam Ashafa and Pastor James were hardly candidates for setting an example for their country or for peace building or unlikely to be described, as they are now, by the Archbishop of Canterbury as ‘a model for Christian Muslim relations’ there, yet today they are examples of how individuals can take bold steps to further understanding and dialogue between us to help heighten our peacemaking potential

The story of the Imam and the Pastor shows that strong ethical commitment in religious traditions can sharpen identity politics but more importantly can form the basis of inter and intra faith collaboration.  Thus religious pluralism can not only lead to an absence of violence mainly due to better understandings and interaction but it opens a space for discussion, dialogue and engagement.  In short, we must learn to listen closely to one another, not simply because it is polite, but because it is just possible that we might learn something important about ourselves, and build a better global village in the process.

Undertaking this offers an antidote to sectarianism and the polarisation of different faiths in multi-cultural societies . This will never be easy, but remains vitally important for creating the very ‘ideas and institutions that will allow us to live together as the global tribe we have become’.  This is perhaps the greatest lesson we can get from the story of the Imam and the Pastor.