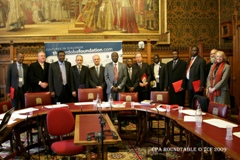 A high-level roundtable convened at the House of Lords on 26 February, commemorated the 4th Anniversary of the signing of the Comprehensive Peace Agreement (CPA) in The Sudan. Hosted by The Cordoba Foundation and Baroness Uddin, the roundtable provided a meeting point of diverse viewpoints, to analyse and assess the positive outcomes as well as the challenges that have emerged in the signing of the January 2005 Comprehensive Peace Agreement in The Sudan. 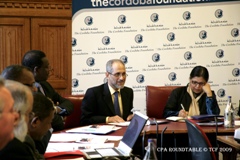 Baroness Pola Uddin opened the proceedings stating “this was a very worthwhile meeting of experts, analysts, diplomats and people concerned with peace and dialogue in The Sudan”. Before congratulating The Cordoba Foundation for staging the event, she paid tribute to Lord Nazir Ahmed – who due to unfortunate circumstances could not be present at the meeting, for his contribution to furthering stability and peace in The Sudan and for initially sponsoring the roundtable.

Guest speakers addressed a range of issues, including the Comprehensive Peace Agreement as a model for the future, the links between the CPA and the Darfur Peace Agreement and the role of the International Criminal Court. 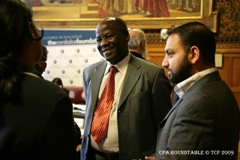 The Sudanese Ambassador in Britain H.E. Omer Siddiq welcomed the discussion which he said “was a step in the right direction and The Cordoba Foundation and Baroness Uddin ought to be applauded for this”. Other speakers included Ex-Minister of Sudan Foreign Affairs Dr Lam Akol who is also a member of the pre-dominantly Christian SPLM; former minister Dr Ghazi Salahuddin, who is Advisor to the Sudanese President and leader of the Majority in the Sudanese Parliament; Peter Jones from Eversheds Law Firm in the UK and Dr Khalid al-Mubarak, Media Counsellor at the Sudan Embassy in London.

Anas Altikriti, the Chief Executive of The Cordoba Foundation and moderator of the roundtable, concluded the meeting by thanking the sponsor as well as the Sudan Embassy in London for their support and stated that “there were important insights in to the various peace initiatives in operations and we hope we can further the spirit of peace dialogue and understanding in The Sudan and beyond.