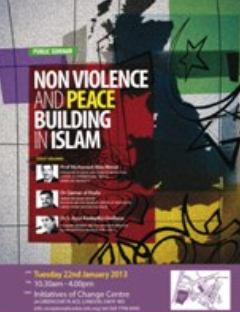 ‘Faith is a restraint against all violence, let no believer commit violence’ (Hadith, Recorded sayings of the Prophet Peace Be Upon Him)

This saying formed the backdrop for a seminar on  ‘Peace building and Non Violence from Islamic Principles’ organised by Initiatives of Change, The Cordoba Foundation and Islamic Relief Worldwide on the 22nd of January 2013 where scholars Dr Ayse Kadayifci-Orellana (Georgetown University), Professor Mohammed Abu Nimer (Salam Institute and American University) and Imam Ajmal Masroor gave their unique perspectives on the subject.

Speaking first, Ayse painted a theoretical picture of the concept of peacebuilding from an Islamic Perspective.  Whilst Muslims agree that Islam is a religion of peace and the application of Islamic precepts will bring justice, harmony and order, consequently peace to the world, academic scholars often paint Islam as a religion of peace and tolerance, which permits the use of violence only under certain well-defined conditions focussing instead on the specific conditions and circumstances under which Islam allowed the use of war to settle conflicts.

Prof Abu-Nimer contends that, although these scholars have attempted to

present a more balanced perspective of Islamic traditions, they have “approached this topic from a framework of security, power politics, strategic studies or classical Islamic studies, not peace and conflict resolution” (Abu-Nimer 2003, 26) and therefore failed to pay sufficient attention to inherent traditions of non violence and peaceful resolution of conflicts which have been an integral aspect of Islamic tradition since the time of the Prophet Mohammed ( PBUH).   In particular, the practice by Prophet Mohammed’s (PBUH) attitude towards peace and his diplomacy, can be summarized as the “reconciliation of hearts” which meant “coming to terms with adversaries and enemies and the contractual guaranteeing of agreements”, and that he preferred peaceful regulation of conflicts and peaceful resolution of enmity. Based on the Qur’anic verse “We did raise among every people a Messenger (with a teaching): Worship God and Shun the Evil one” (Q16:36), scholars such as Jawdat Sa’id of Syria argue that “the Prophets come with the message to avoid wicked tyranny and they disclosed that the tyrant could not continue to exist without our obedience to him.”

Derived from the Quran, the Hadith and the Sunna, an Islamic conception of peace begins with its attribution as a divine name since the Arabic word for peace, as-Salam, is one of the ninety-nine names of God (Qur’an – Q 59:23). There are many references to peace (salam, silm, sulh, etc.) in the Qur’an that suggest that peace, together with justice (adl) is a central message of Islam (Q 3:83; 4:58; 5:8; 10:25; 16:90; 41:11; 42:15; 57:25) These references make it clear that peace in Islam is not limited to a negative understanding of peace that is often defined as the absence of war, oppression or tyranny but it actually refers to a process in which human beings strive to establish foundations for interacting with God’s creation – human and non-human alike—in harmony and to institute just social, economic and political structures where they can fulfil their potential . Such an understanding of peace thus requires a condition of both internal and external order that encompasses both individual and social spheres as “the individual must be endowed with the necessary qualities to make peace an enduring reality, not only in the public sphere but also in the private domain”.

Dr Kadayifci then spoke about some of the values that drive Islamic principles of peace building and non violence including the quest for justice (political / social / economic) or  Adl; the concept of social empowerment or  Ihsan ( benevolence); the concepts of : compassion or Rahmah; wisdom or Hikmah; service or Amal; faith or Yakeen; love or Muhabbah and patience or Sabr.

Ajmal Masroor presented his own experiences growing up in the UK of tackling prejudice and extremism on the road to peace building.  He spoke about the need first to reconcile within ones heart as the first step towards peace building and non violence and finding peace with enemies.

of the dynamic relationship between the Islamic tradition that unites Muslims and the unique geographical, cultural, historical and political contexts of each Muslim community that impacts specific tools for resolving conflicts.  Islamic culture is not an ‘object’ that can be reified into one objective or dimension;” nor is it distributed uniformly among all Muslims. Culture is not a static entity that can be identified as a constant, but it is always in the making, constantly evolving and changing with the experiences and context of society. Furthermore, there is more than one Islamic culture depending on geography and demography as well as various subcultures, within each community. Therefore, conflict resolution practices in different Islamic countries such as Egypt, Indonesia, Afghanistan, and Palestine, amongst others, have various differences due to their unique contexts. Such an understanding of culture allows us to recognize that each Muslim community will have many internal paradoxes, subcultures, and identities. This perspective also recognizes that each Muslim responds to the realities and challenges of life in their own unique way influenced by the many identities and subcultures s/he is a part of. These contextual factors and cultural differences have also led to different understanding of Islamic teachings and practices. In fact, as long as they do not contradict Islamic teachings, local customs (urf) are often considered a source of Islamic law.

In this regard, Professor Abu Nimer addressed some key issues surrounding the context of peace building within Islam.  Looking at peace building within an Islamic context has to deal with the concept of justice and dignity.  There is heavy emphasis on public image and the role of third parties cannot be underestimated whilst a lot is dependent on relationship building.   Professor Abu Nimer also pointed out that a lot of the communities where peacebuilding is needed are burdened by colonial history adding additional challenges to narratives of coexistence and non violent resolutions of conflict.

The seminar touched very briefly on various community conflict resolution mechanisms that have been developed and effective applied to resolve conflicts in the Muslim world such as wasata (mediation), sulha (reconciliation) and hewar (dialogue).