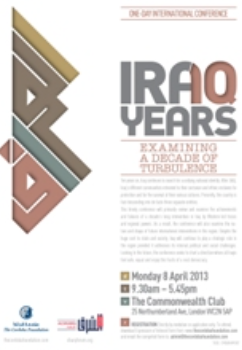 Iraq is edging closer to civil war and break up into separate states, with almost none of its pre-invasion promises coming to fruition, experts warned  at a ground-breaking conference held on the future of the country in Central London.

Ten years after the fall of Baghdad, policy-makers, politicians, academics, military experts, ex-senior military officials and voices from across the Middle East converged at The Commonwealth Club  in London (8th April) to debate Iraq’s future and its bloody past decade.

Watched by international media, Dr Anas Altikriti, CEO of The Cordoba Foundation, reflected on his time as a hostage negotiator, attempting to secure the release of fellow conference speaker Professor Norman Kember and other hostages in 2005/6. He said: ‘The people of Iraq have been through quite a rollercoaster. But we didn’t just come and discover these problems in 2003: we have seen divisions for centuries.’

Co-organiser, Wadar Khanfar of Al Sharq Forum and former Al Jazeera director general, recalled seeing the signs of a ‘new’ Iraq as part of Al Jazeera’s bureau in the country: ‘Ten years ago I was covering the war in Iraq. I remember as I entered Baghdad that all the state buildings were on fire. It was not the image of a free Baghdad that people wanted to see.’

as having moved forward.’ The failures, he said, could be traced back 100 years to the end of the First World War, with ‘deep suspicion’ among many observers about the latest conflict. He warned that three de-facto states could soon appear where now one (Iraq) exists.

‘Iraq is not at a crossroads,’ suggested Middle East Monitor director Dr Daud Abdullah, ‘it has passed it. The north is a de facto state, with Irbil not even talking to Baghdad about oil contracts. The world’s third-largest oil producer has 36% of its citizens living in poverty.’ He suggested that the presence of death squads and private militias was similar to the El Salvador “dirty war” in the 1980s, with current premier Al-Maliki concentrating power in his hands alone.

The attitude of the Americans and their allies was ‘naive, lacking depth and profundity’ prior to the 2003 invasion, said Professor Rosemary Hollis, former research director of Chatham House. ‘There was too much emphasis on elections, as though that would create democracy.’

against attempting to re-draw colonial boundaries, arguing it was time to ‘unite the region’ rather than recreate it. She referred to the former neo-conservative movement, the Project for a New American Century, and its ‘terrifying documents’ planning the (mythical) future of Iraq.

Various academic speakers, including Professor Phil Marfleet of University of East London, said that there was a dearth of academic research into Iraq post-2003, particularly the humanitarian costs, labeling this ‘the politics of denial’.

Dr Nabil Ramadhani of the Human Relief Foundation revealed shocking statistics showing the decline in living standards, increase in poverty, and the threats women face – attacks and sexual assaults – even travelling in their own neighbourhoods. ‘Iraqi women have paid a high price for the war and occupation of their country.’

Drawing the event to a close, Dr Altikriti said that the Iraqi people and the rest of the world had been offered a false choice between Saddam and what the Americans said they would bring afterwards. ‘There were other ways, other choices,’ he said, arguing that international law had been degraded and flouted, creating a world in which we were all now less safe and damaging democracy even here in the UK.