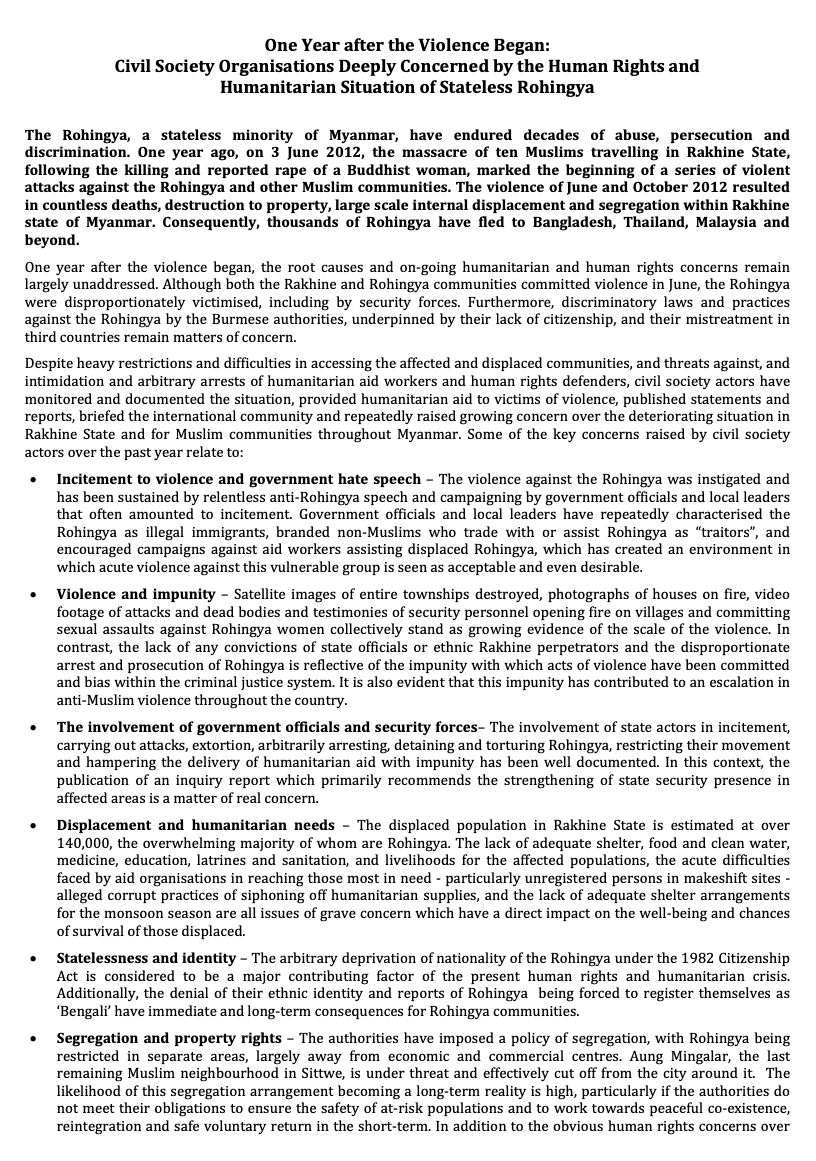 Today, the Equal Rights Trust, The Cordoba Foundation and 75 other civil society organisations issued a joint statement calling for an end to on-going human rights and humanitarian abuses against the stateless Rohingya in Rakhine state of Myanmar. The statement, which is simultaneously being issued by organisations on five continents and sent to the President of Myanmar and Myanmar embassies around the world, is an expression of global civil society solidarity regarding human rights protection of the  Rohingya.

The Rohingya, a stateless minority of Myanmar, have endured decades of abuse, persecution and discrimination. One year ago, on 3 June 2012, the massacre of ten Muslims travelling in Rakhine State, following the killing and reported rape of a Buddhist woman, marked the beginning of a series of violent attacks against the Rohingya and other Muslim communities. The violence of June and October 2012 resulted in deaths, destruction to property, large scale internal displacement and segregation within Rakhine state of Myanmar. While up to 800 deaths resulting from the violence have been documented, it is believed that the actual number is in the thousands. The subsequent mass exodus has led to a rise of the numbers of Rohingya refugees fleeing to Bangladesh, Thailand, Malaysia and beyond.

One year after the violence began, its root causes, as well as on-going humanitarian and human rights concerns, remain largely unaddressed. Although both the Rakhine and Rohingya communities committed violence in June, the Rohingya were disproportionately victimised, including by security forces. Furthermore, discriminatory laws and practices against the Rohingya by the Burmese authorities, underpinned by their lack of citizenship, and their mistreatment in third countries, remain matters of concern.

The Joint Statement alerts the international community to several trends observed by civil society organisations over the past year, with regard to the crimes against humanity perpetrated by the Myanmar authorities; the lack of protection for Rohingya refugees and asylum seekers; the violence against the Rohingya and the impunity of perpetrators; the incitement to violence and government hate speech;  the involvement of government officials and security forces; the displacement of the Rohingya; their urgent humanitarian needs; their statelessness; the segregation of the Rohingya and their property rights; the discriminatory restrictions on their family life and freedom of movement. The Joint Statement makes recommendations to the governments of Myanmar and refugee recipient countries and to the international community at large.