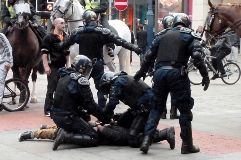 The riots that have engulfed London and other major cities in England over the past week have finally receded, but in the wake of the horrific scenes of violence, looting and arson that left people shaken, the real issues look set to take centre stage, especially as post-mortem examinations are carried out.

Yet while it would be easy for questions just to focus on the failures of the system, it would be a shame to simply gloss over examining the causes of the initial riot and the subsequent snowballing incidents of looting and criminality. The complication, though, is that the riot had multifaceted elements, and a proper approach to examining its causes is akin to the peeling away of the layers of an onion’s skin.

The government, for its part, is perhaps keen to highlight these incidents as “criminality” as opposed to anything deeper, despite David Cameron’s statement to parliament on its recall from the summer break, acknowledging the potential “context” of the riots. In a way, there is some justification to regarding some of the incidents as criminal, especially some of the copy-cat incidents that followed the initial wave of riots on Saturday night. However, to simply blame this on criminality is perhaps to be slightly naive, an attempt to put a Band-Aid on a very deep wound in British society.

A slightly longer version of this article appeared on the website of the Journal of Inter-Religious Dialogue.  Please click here to read more.