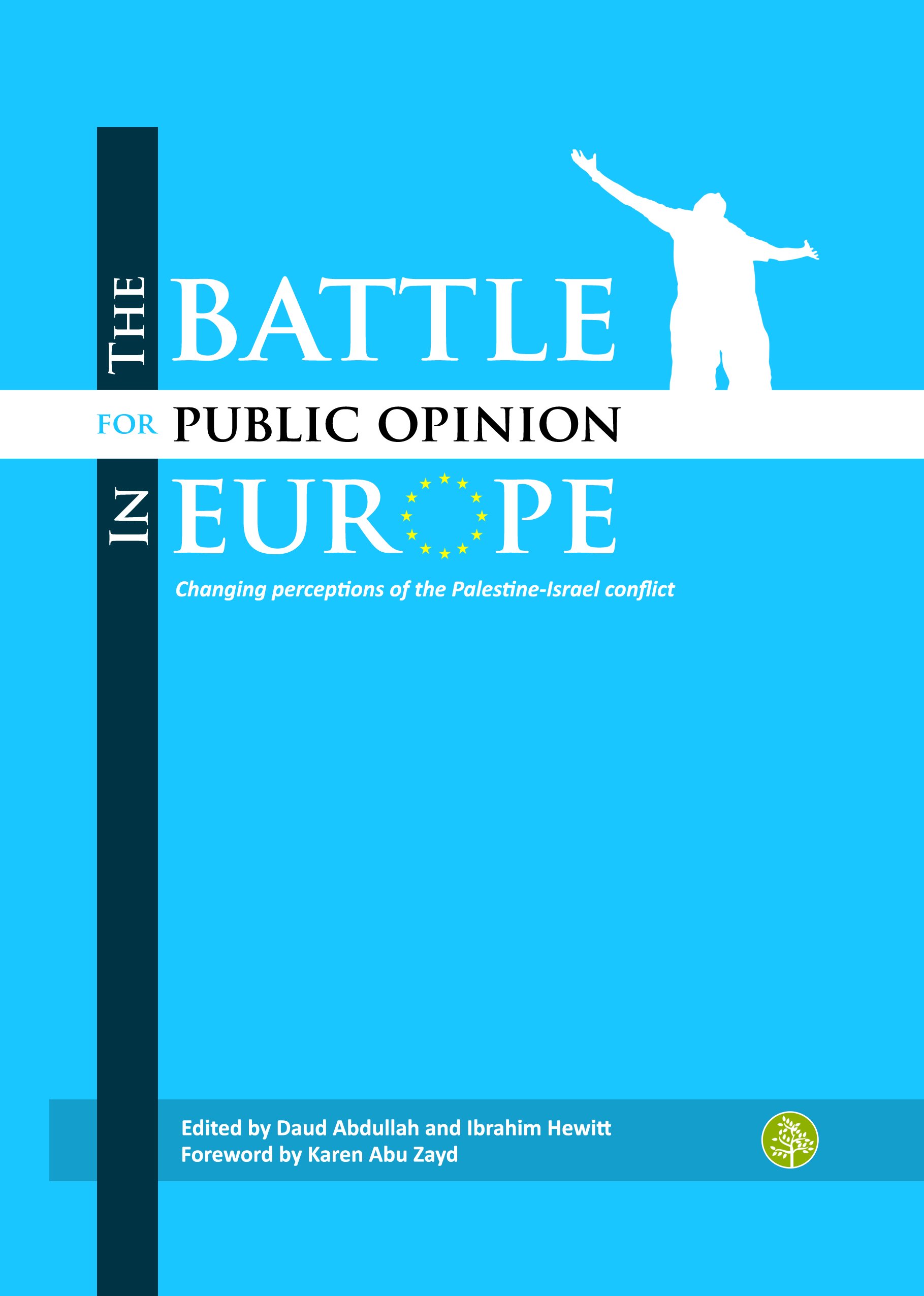 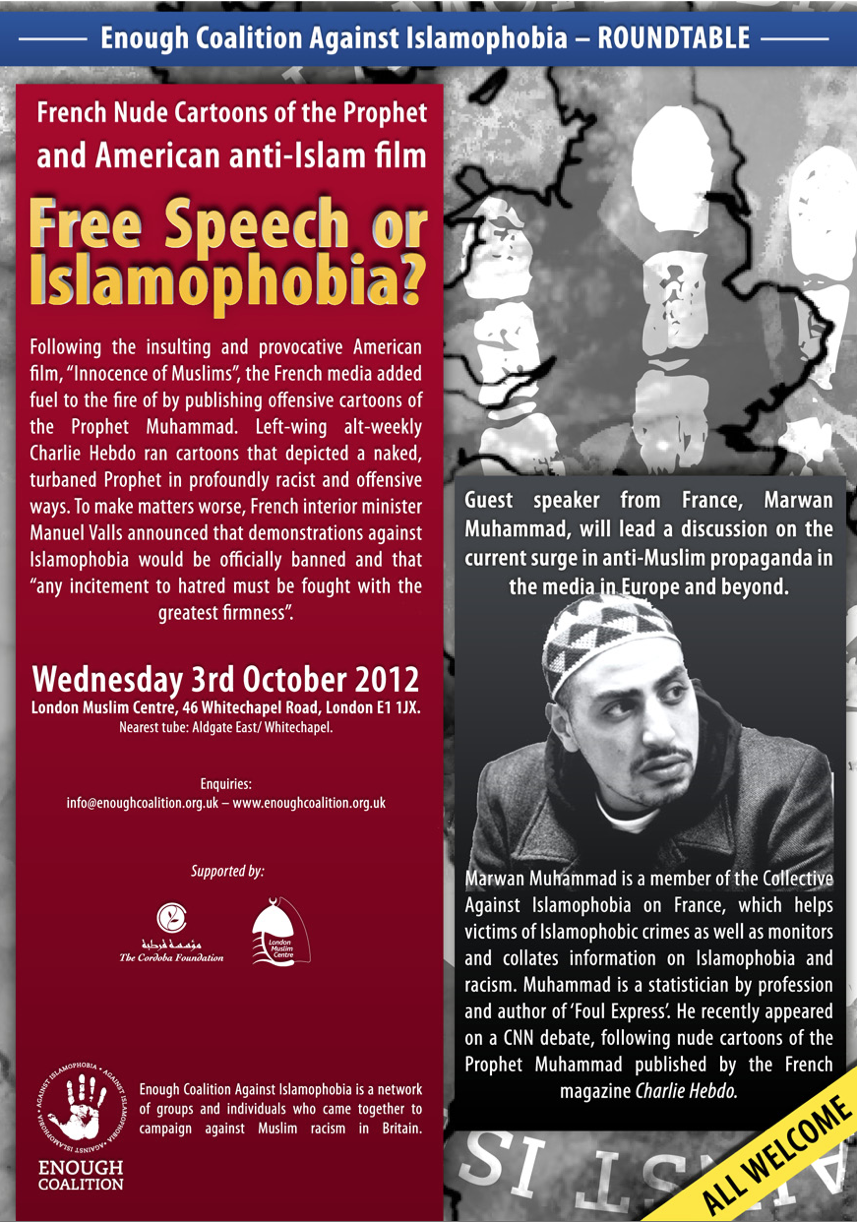 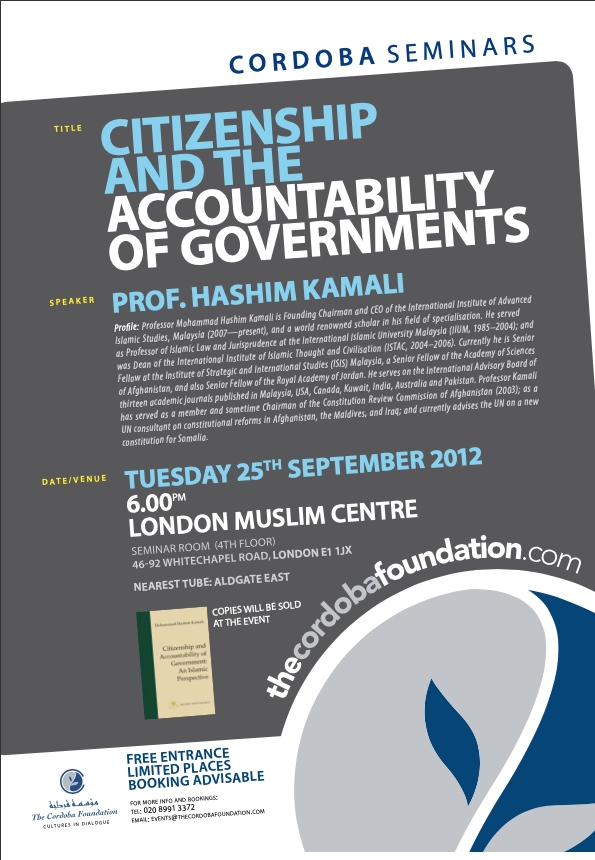 The Cordoba Foundation invites you to its Cordoba Seminars series:

Title – Citizenship and the Accountability of Governments

Prof Kamali will be speaking on his latest book ‘Citizenship and Accountability of Government: An Islamic Perspective’ which is the final volume in a series on fundamental rights and liberties in Islam.
Copies of the book will be available on the night to purchase.

Staging the Ummah: An Evening with Wajahat Ali

A Provocative Look at the State of Muslim Culture Today

What is the state of Muslim arts and culture – cutting edge and innovative, or boring and dull?
Is there a need to define to a British or American Islam? How do we represent Islam on screen, on stage, through novels and in poetry?
Doesn’t staging the ummah mean we are just selling a “safe” version Islam to the chattering classes?
Join us as we talk to award-winning playwright and author Wajahat Ali about the state of Muslim arts and culture today – and whether the project of defining a culturally relevant Islam for our times is even worth pursing.

FREE – but space is limited, so let us know you are coming!

Supported by the Radical Middle Way, The Leaf Network, The Cordoba Foundation and Rumi’s Cave.

Wajahat Ali – playwright, author, journalist and attorney – is a Muslim American of Pakistani descent and is the author of the acclaimed play, The Domestic Crusaders, which premiered in 2005 at the Thrust Stage of the Berkeley Repertory Theatre and San Jose University Theatre, broke box office records in New York in 2009, was published by McSweeney’s in December 2010 and went on to be performed at Kennedy Center for the Performing Arts in Washington, DC.

Ali’s essays and interviews on contemporary affairs, politics, the media, popular culture and religion frequently appear in the Washington Post, The Guardian , Salon , Slate , McSweeney’s , Wall Street Journal Blog ,  Huffington Post , CNN.com ,  CounterPunch and Chowk, among other on-line sites. His blog, “Goatmilk: An Intellectual Playground ” is ranked in the top 7% of all political blogs by blogged.com. Wajahat is the recipient of Muslim Public Affairs Council’s prestigious “Emerging Muslim American Artist” recognition of 2009 and was given the 2011 Otto Award for Political Theatre.

In 2011, he was the lead author and researcher of “Fear Inc., The Roots of the Islamophobia Network in America” published by The Center for American Progress. Ali is the co-editor of the anthology “All-American: 45 American Men on Being Muslim” published this June 2012 by White Cloud Press. Wajahat is currently writing a TV pilot with Dave Eggers about a Muslim American cop in the Bay Area, California, and he is working on his first movie screenplay 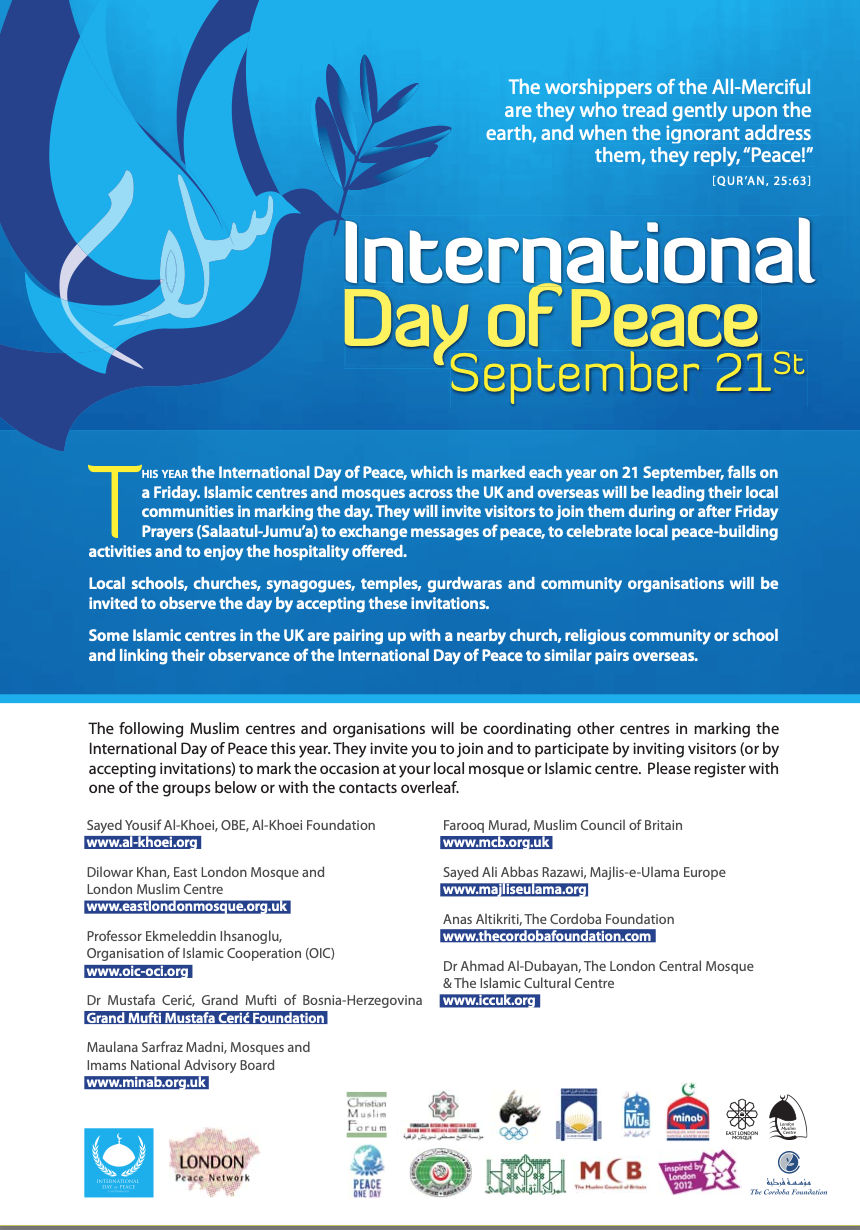 This year the International Day of Peace, which is marked each year on 21 September, falls on  a Friday. Islamic centres and mosques across the UK and overseas will be leading their local communities in marking the day. They will invite visitors to join them during or after Friday  Prayers (Salaatul-Jumu’a) to exchange messages of peace, to celebrate local peace-building  activities and to enjoy the hospitality offered.

Local schools, churches, synagogues, temples, gurdwaras and community organisations will be  invited to observe the day by accepting these invitations.

Some Islamic centres in the UK are pairing up with a nearby church, religious community or school  and linking their observance of the International Day of Peace to similar pairs overseas.

Lecture: How to Engage With Politics – 21st September 2012

In a democratic system like ours, citizens have multiple avenues to influence the policies and laws that govern our society. Yet, many Muslims continue to live on the fringe of politics and do not engage in public matters. The only way for us to ensure our voices are heard is to make the most of the opportunities for involvement and to become engaged citizens.

In this talk, Anas Altikriti, the CEO of The Cordoba Foundation will discuss a variety of paths for engagement in public life and share stories from his own engagement.

Hosted by The City Circle 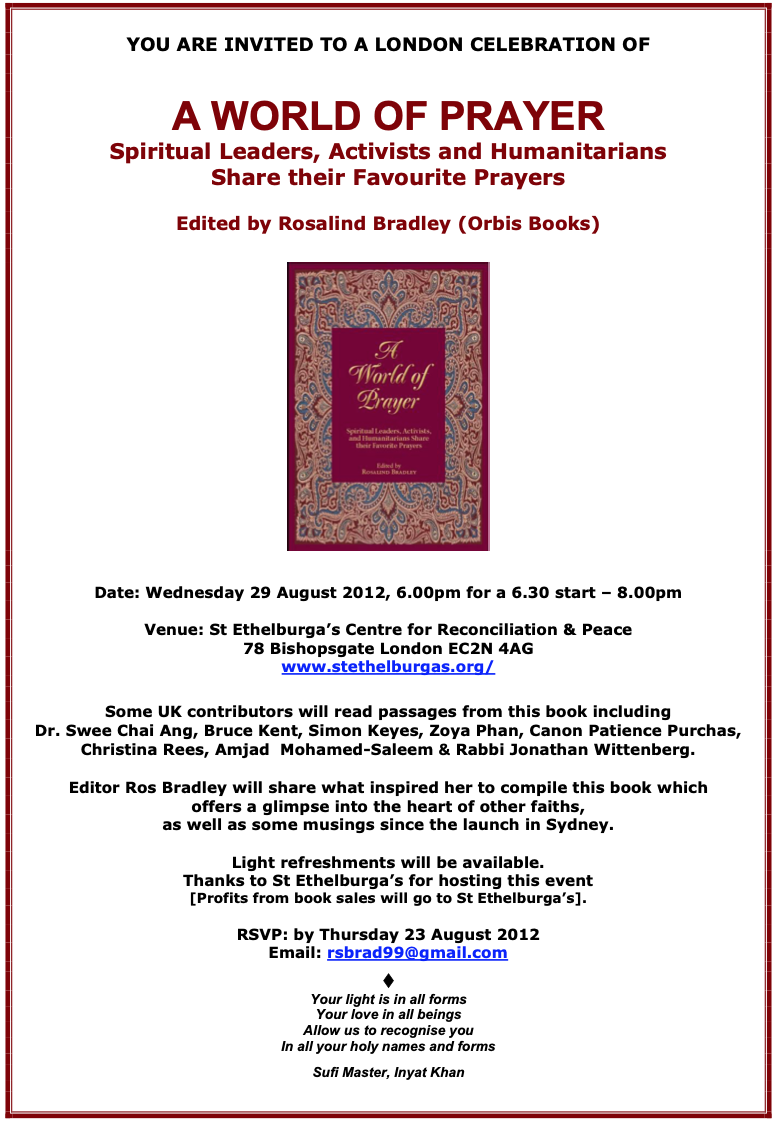 Book Launch: A World of Prayer

Editor Ros Bradley will share what inspired her to compile this book which offers a glimpse into the heart of other faiths, as well as some musings since the launch in Sydney.

Seventeen years ago this month, thousands of Bosnian Muslims were slaughtered in Europe. Some were killed opportunistically, but most were killed in a full-scale military operation: hands tied and blindfolded, they were lined up before freshly dug mass graves and shot in the back. In other cases, rather than bussing them to mass grave locations, their captors chose to murder them were they were detained – slaughtering them by the hundreds at a warehouse and theatre, by volleys of gunfire and rocket propelled grenades.

Later, earth-moving equipment would be used to remove the dead – and perhaps some living – and deposit them into other mass graves. It is estimated that over 8,000 Muslims were executed after the July 11, 1995, fall of Srebrenica, Bosnia, to the Bosnian Serbs. Like many of recent history’s slaughters, the international community was already present. A battalion of Dutch U.N. peacekeepers was responsible for protecting the first U.N.-declared “safe area” in Srebrenica. As the Bosnian Serb Army advanced on the city, U.N. offi cials declined to allow NATO warplanes to intervene until it was too late. The Serbs took Srebrenica without a fight and thousands of Bosnian Muslims fled to what they thought was the protection of the U.N. base in Potocari. Rather than offering a safe haven, the United Nations expelled fearful Muslims from their base and watched as another European genocide unfolded. In a scene evocative of Schindler’s List–a case of life imitating art, imitating life- -families were torn apart under the watchful eyes of the international community. Men and boys were separated from women and small children, never to be seen again.

Every year, international diplomats pause to remember the world’s most recent genocides. On 11th July, the world will mark the seventeenth anniversary of Srebrenica genocide. Join us to remember those who perished and the survivors. Meet British Muslims who visited Bosnia in the past, and a delegation visiting this July. 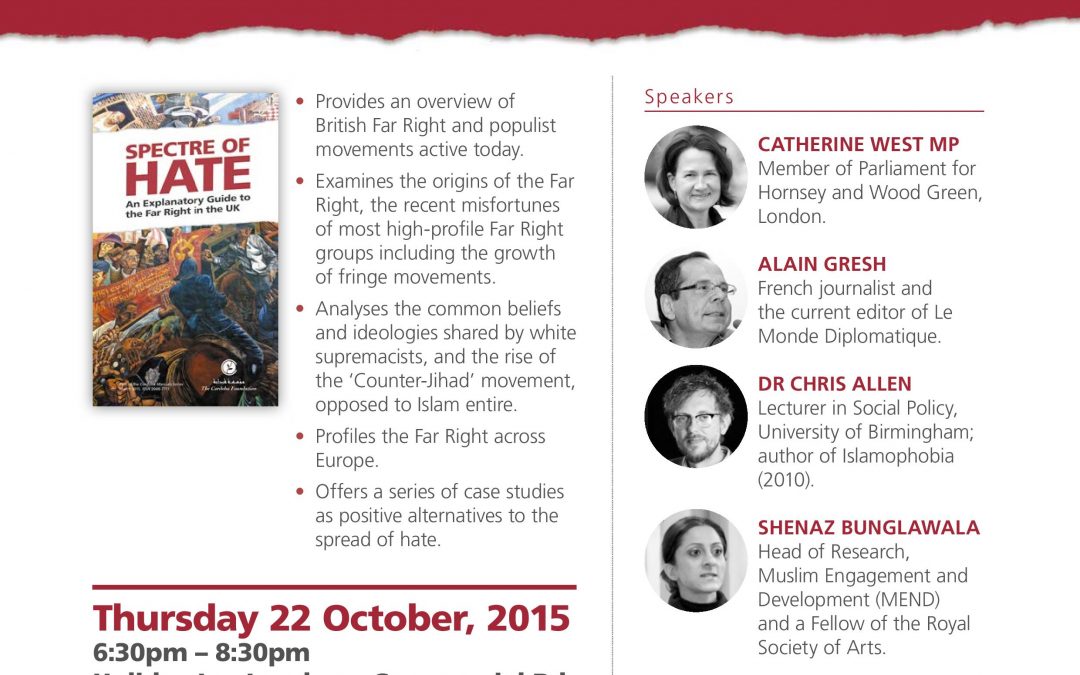