Presented with support from The London Tigers and The Cordoba Foundation

Fordson: Faith, Fasting, Football follows a predominately Muslim and Arab high school football team from a working-class Detroit suburb as they practice for their big cross-town rivalry game during the last ten days of Ramadan, revealing a community holding onto its Islamic faith while they struggle, under the dark clouds of growing anti-Muslim hatred, for acceptance in post 9/11 America.

Through the eyes of the team, their coaches, and their fans, Fordson offers an unprecedented glimpse inside the lives of a community that is home to the largest concentration of Arabs in any city outside of the Middle East, and their determination to share in and hold on to the American Dream.

As a sequel to Working with the Media guide released in 2008, this is the second in a series of training manuals produced by The Cordoba Foundation. The guide provides the targeted  readership with practical guidelines and tips to ‘up-skilling’ with the necessary information, tools and guidance to become not just active but proactive citizens – and ultimately to play a better and more effective role in society.

The guide aims to give our readers, in particular British Muslims, the knowledge and confdence to engage with lobbyists, politicians, campaigns and people of infuence to bring about changes – from addressing national and international issues by lobbying MPs and Ministers, to local issues such as services provided to the surrounding community and residential areas. 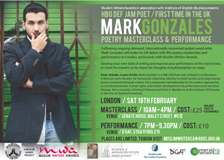 This event is supported by The Cordoba Foundation 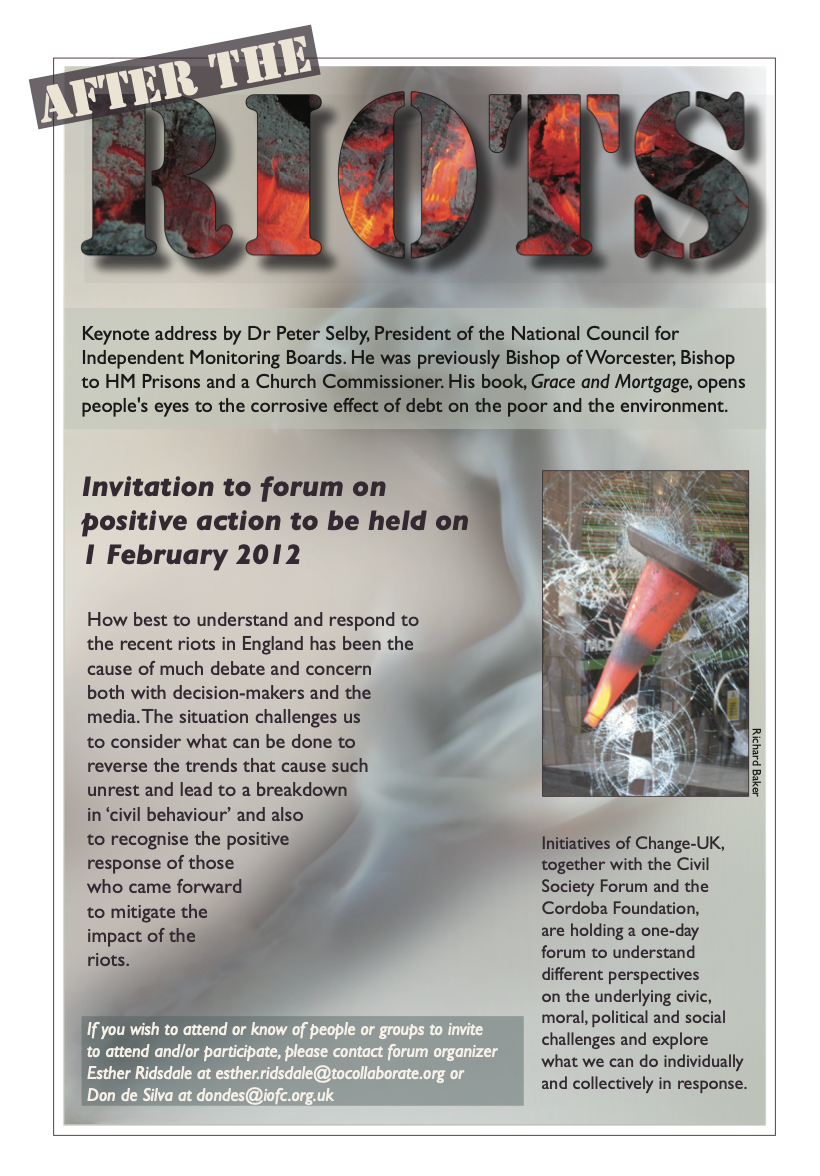 Forum: After the Riots

Organised by Initiatives of Change (IofC) UK, the Civil Society Forum and The Cordoba Foundation,

How best to understand and respond to the recent riots in England has been the cause of much debate and concern both with decision-makers and the media. The situation challenges us to consider what can be done to reverse the trends that cause such unrest and lead to a breakdown in ‘civil behaviour’ and also to recognise the positive response of those who came forward to mitigate the impact of the riots.

Initiatives of Change (IofC) UK, together with the recently established Civil Society Forum and The Cordoba Foundation, plan to hold a one day forum to understand different perspectives on the underlying civic, moral, political and social challenges and explore what we can do individually and collectively in response.

The keynote address will be given by Dr Peter Selby, President of the National Council for Independent Monitoring Boards. He was previously Bishop of Worcester, Bishop to HM Prisons and a Church Commissioner. His book, Grace and Mortgage, opens people’s eyes to the corrosive effect of debt on the poor and the environment.

The Forum will be held at the IofC UK centre at 24 Greencoat Place, London SW1P 1RD on 1 February 2012. As individual citizens, communities, and NGOs and government organisations have been collecting thoughts and gathering together in and towards action, the event will bring people together to take the thinking further, share understanding and look at what can be done.

We will explore the underlying issues, particularly the challenge of re-engagement both practically and morally, approaches to tackling the main challenges, identify specific ways forward, and consider how all participants can make a contribution, individually and collectively.

The day will be a combination of inter-active presentations, and large and small group dialogue. It will create space to reflect and explore ways to tackle dis-enfranchisement and dis-engagement in civil society and include consideration of what stopped the violence starting and spreading in different areas

The forum will focus on seeing where we may need to build and adapt our approaches, and to find action that we can take in our own communities, and organisations.

The organisers are inviting individuals and groups including community and faith-based groups, NGOs and government organisations, who can make a particular contribution.

To ensure workable numbers for the venue and the participatory nature of the event, attendance will be by application. Notification will be given at least four weeks before the event.

If you wish to attend, download the application form and send to either Esther Risdale or Don de Silva

For more information about the event, please click here

Please click here for a briefing note on the riots

On 11 January 2002, the first of nearly 800 prisoners was sent to the US military prison camp at Guantanamo Bay.  Images of these men kneeling and shackled, wearing orange boiler suits, goggled and masked, shocked the world.  Ten years on, 171 prisoners remain in captivity – all without due process.

Cageprioners, Reprieve and the Islamic Human Rights Commission would like to invite you to join an historic gathering to mark a decade of Guantanamo.

This event is supported by The Cordoba Foundation.

Ten years ago, shortly after the 9/11 attacks, the British government passed laws allowing them to detain and imprison foreign “terrorism suspects” without charge or trial. By December 2001, almost a dozen Muslim men, mainly from Algeria, had been detained and later became known, with others, as the “Belmarsh detainees”. They were held without trial or charge for over three years until the courts ruled this system illegal in 2004. The men were released but things did not get better for them or their families… control orders were introduced in 2005 and others were subject to harsh bail restrictions after being threatened with deportation to their countries of origin – Algeria, Jordan and Libya. Tagged, with restrictions on their freedom, all without having any idea of the reason why, this has been the life of at least 18 individuals and families over the past decade, with no end in sight… 10 years of not knowing the accusations, of coming up against a wall of silence and secret evidence by the Home Office in court, not knowing if they will be deported to countries that will torture, of abuse, misuse and being ignored by the wider community. At the same time, the British government is seeking to replace the control order regime with new Terrorism Prevention and Investigation Measures (T-PIMs), to broaden the number of countries so-called terrorism suspects can be deported to without knowing the reason why and to harshen its anti-terrorism laws.

Talk: Concept of Change in the Prophetic Seerah