The Evolution of Political Islam and Populist Politics: Caliphs & Democrats

The Evolution of Political Islam and Populist Politics: Caliphs & Democrats

Summary from a webinar presentation, hosted by The Cordoba Foundation

The puzzle of Political Islam

Modern Political Islam takes many forms. People and groups as diverse as Osama bin Ladin’s Al-Qa’ida organisation, and French women protesting a ban on head scarfs get called expressions of “Political Islam.” The Economist, in discussing this situation, spoke of “the puzzle of political Islam.”1 Part of this puzzle reflects important contradictions in the way we look at Political Islam. Many people use an outdated conceptual-analytical framework for trying to understand the nature of Political Islam.

There are old-fashioned ways of analysing Political Islam that still have value but are based on looking at things in a binary way – things are either “x”, or they are “y”. In analysing Political Islam, people often end up viewing movements or attitudes as binary, being either “secular” or “religious” or being “traditional” or “modern.” In that context, the immense variety of groups that are usually associated with Political Islam becomes a real puzzle. In actual operation, Political Islam appears in forms that are both secularly radical and religiously fundamentalist or express an identity that combines the traditional and modern in ideology and modes of operation.

The many forms of Political Islam

Simplistic, either/or binary identifications obscure the diversity of forms of Political Islam, creating artificial categories for analysis. It is important to recognise the real contrasts among things that have been labelled Political Islam. One might compare, for example, the militant activism and terrorism of Al-Qa’ida under the leadership of Osama bin Laden, especially in the 1990s, with the head-scarf wearing French women protesting for the right to wear the hijab whose protest slogan called for liberty, equality and fraternity. These are all part of the many forms of Political Islam.

One of the fascinating expressions of Political Islam is a very popular rapper, Amir Tataloo in Iran, who raps in Persian. During the negotiations in 2015 which resulted in the agreement on Iranian nuclear production capacity, he released a special rap video supporting the hardline position of the Islamic Republic of Iran. The video was produced by the Iranian Republic navy and had the support of the hardline Ayatollah, Sayyid Ebrahim Raisi, who was later elected President of the Republic.

It raises a question then: what is the nature of Political Islam – that it can include a radical rapper and the Ayatollahs in Iran?

The many different faces of Political Islam include women. Women in Egypt throughout the 20th century and into the 21st , for example, played important roles in protests and movements. The fashions of the day reflect some of the changes. In 1919 there was a nationalist revolution that women participated in. Some women participated with faces covered and conservative dress – but the clothing that they were wearing was not old-fashioned, it was not traditional. It was a new kind of explicit dress of identification that was Islamic but not traditional. In the same way, women in Tahrir Square in Cairo during the Arab Spring protests in 2011 could be seen as being part of a variety of people protesting and their head covering reflected 21st century fashions while still being in hijab.

With all of this diversity of types of activism and direct political participation, it becomes helpful to make at-least one distinction. Some of the activities that get called Political Islam are actions taken by Muslims because they are participating in politics – it is a mode of acting politically. It is the broad spectrum of ways that Muslims act politically. Some scholars have called it Muslimism. This kind of Political Islam was visible in Tahrir Square. It was not formally organised, not part of a formal group, not part of an institution, but rather a mode of acting politically.

The other, more common usage of the term is to apply it to specific movements, like the Iranian Revolution led by Ayatollah Khomeini, specific organisations like the Muslim Brotherhood and al-Qa’ida, and ideologically influential intellectuals like Abu al-Ala Mawdudi.

An analysis of the evolution of Political Islam in the 20th and 21st centuries could begin by looking at the emergence of the believing community in the time of the Prophet Muhammad in the 7th century. However, Political Islam is also a distinctive modern phenomenon as well as a long-term historical dimension of Muslim history.

If we are conscious of trying to avoid a binary analysis which identifies movements as either “secular” or “religious,” either “traditional” or “modern,” it changes the narrative. All of the movements of what is called Political Islam are in many ways modern. The distinction between traditional and modern fades into a synthesis of traditional and modern. And in the same way, movements that are active in the secular world may be religious and movements that are active in the religious world may be secular. And so we have what might be called a religio-secular synthesis of political activism within the Muslim world.

An important transition time in the history of Muslim political activism was World War I. That war brought an end to old-style empires like the Ottomans and Hapsburgs – and opened the way for the modern Muslim politics of nationalism and new state creation. Claims to leadership based on the call for re-establishing a caliphate lost support. New state systems based on national or Islamic identities – like the newly established Turkish Republic and the Kingdom of Saudi Arabia – articulated political visions that combined religious and ethno-cultural identities in the period between the two World Wars. In Egypt, for example, the nationalism of Sa’d Zaghlul and the Islamism of the then-newly-created Muslim Brotherhood were political competitors but this was not a competition between “modern” and “traditional” politics, since both movements were modern political entities.

Following World War II, the older style nationalism was challenged in many places and replaced by a new radicalism in which nationalism provided the major vision and Islam tended to be a secondary element in articulating political ideologies. However, this “secular” nationalism was not anti-religious but rather presented a religio-secular political synthesis. By the 1970s, this radical nationalism had created authoritarian dictatorships and an opposition articulated in Islamic terms emerged as the most effective form of political populism and reform.

By the 1980s, a broad set of movements emerged as major political forces and observers used the term ‘Political Islam’ to identify them. Among the most important of these are the Iranian Islamic Republic, the Muslim Brotherhood in a number of countries, the Islamic Tendency (later organised as a political party, al-Nahda) in Tunisia, and the Muslim Youth Movement in Malaysia.

By the beginning of the 21st century, Islamically articulated political visions and populist appeals became a major element in the evolution of Muslim political activism and global politics. It was possible for a very well-informed observer in 2002 to say, “Islamism has become, in fact, the primary vehicle and vocabulary of most political discourse throughout the Muslim world… The region’s nationalist parties are weak and discredited, and nationalism itself has often been absorbed into Islamism.”2

The continuing evolution of Political Islam in the 21st century involved a number of diverse developments. The development of Al-Qa’ida from a local militant group in Afghanistan into a globally significant set of terrorist networks and the establishment of the Taliban as rulers of Afghanistan both reflected the importance of locally-based manifestations of a militant Political Islam. A very different part of the spectrum of Political Islam involves the self-re-definition of Islamists like Rashid Ghannouchi as “Muslim democrats.” An important factor in the changing nature of Political Islam is the increasing importance of the Internet and social media in creating communication networks of activists and providing ways of recruiting new supporters. As a result, a sense of political populism is an increasingly important aspect of global Political Islam.

“Political Islam” has become a useful label for the significant developments of Muslim political activism. It provides a way of noting the global and local dynamism of Muslim politics in the 21st century. In a time when it is possible to speak of “multiple modernities,” it is important to recognise that Political Islam is not a form of traditional society and culture opposing modernity. Instead, it is an important element in the efforts to define the various possible forms of Islamic modernity.

John O. Voll is Professor Emeritus of Islamic History at Georgetown University. He is a past president of the Middle East Studies Association of North America. His most recent book is the co-authored volume, Islam and Democracy after the Arab Spring.

All rights reserved. No part of this publication may be reproduced, stored in a retrieval system or transmitted in any form or by any means, electronic or otherwise, without prior permission of the The Cordoba Foundation.

Disclaimer
Views and opinions expressed in this publication do not necessarily reflect those of The Cordoba Foundation.

Published in London by The Cordoba Foundation 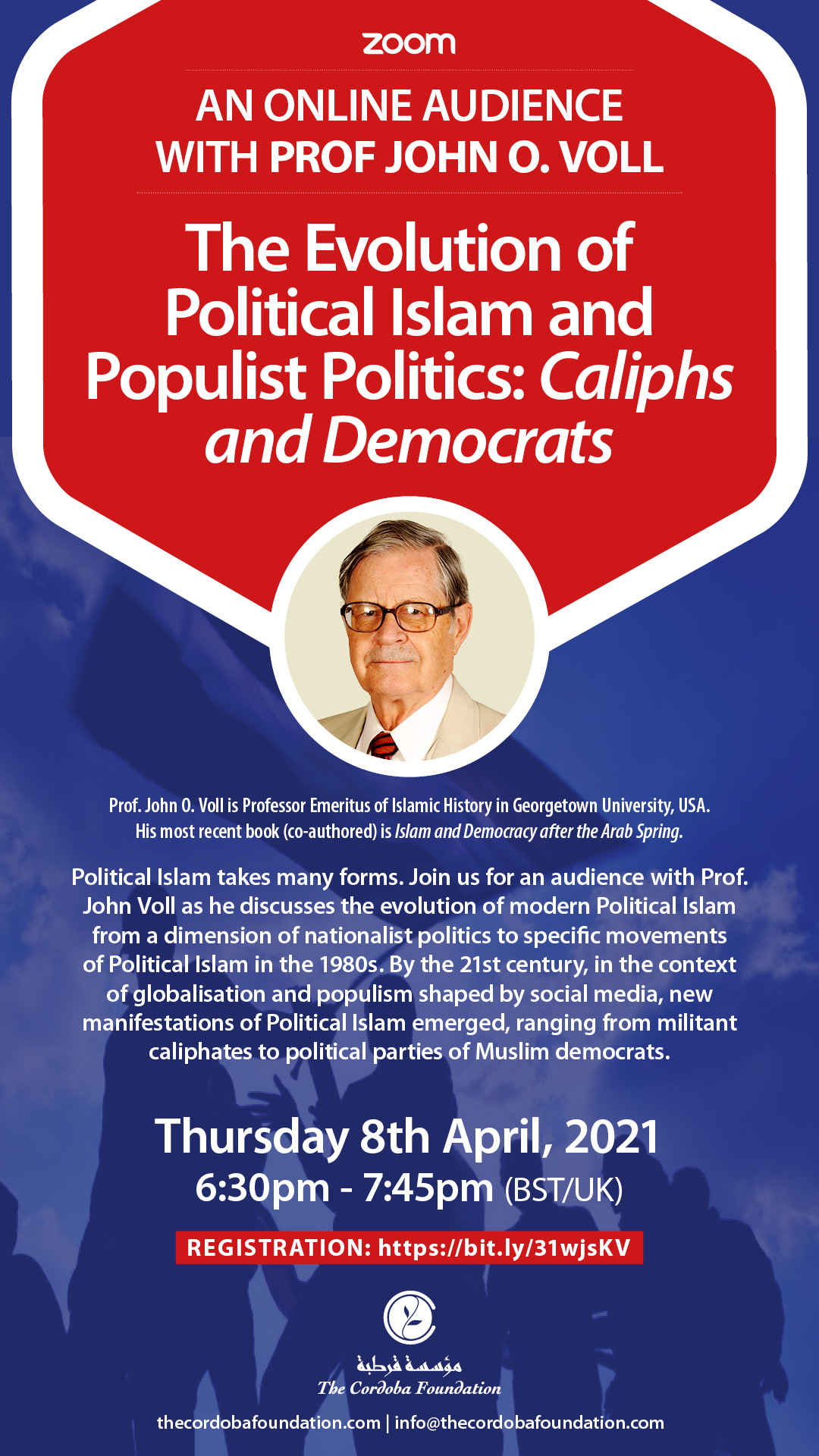