Cordoba Heritage Series: Victoria and Abdul – The Story of a Queen and her Muslim Confidant 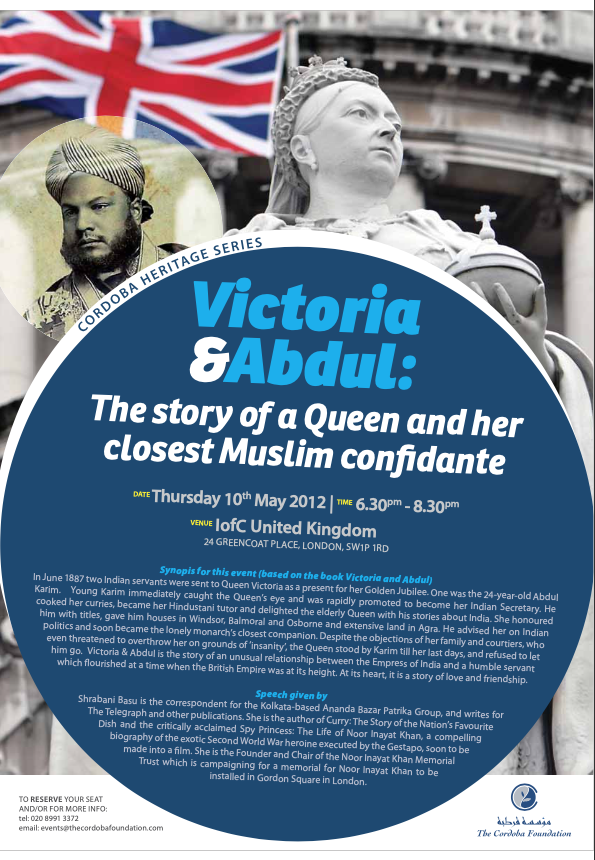 The Cordoba Foundation is launching a new series of talks called ‘Cordoba Heritage Series‘ aimed at exploring, understanding and appreciating our common heritage and creative legacy to offer solutions to difficult questions of identity and belonging in today’s  ‘West’.  By exploring the shared history that acknowledges the many sources of western culture from the east, we recognise the history of empire as a history that belongs equally to all its heirs, of every race, faith and nation.

In June 1887 two Indian servants were sent to Queen Victoria as a present for her Golden Jubilee. One was the 24-year-old Abdul Karim.   Young Karim immediately caught the Queen’s eye and was rapidly promoted to become her Indian Secretary. He cooked her curries, became her Hindustani tutor and delighted the elderly Queen with his stories about India. She honoured him with titles, gave him houses in Windsor, Balmoral and Osborne and extensive land in Agra. He advised her on Indian politics and soon became the lonely monarch’s closest companion. Despite the objections of her family and courtiers, who even threatened to overthrow her on grounds of ‘insanity’, the Queen stood by Karim till her last days, and refused to let him go.

Victora & Abdul is the story of an unusual relationship between the Empress of India and a humble servant which flourished at a time when the British Empire was at its height. At its heart, it is a story of love and friendship in the midst of tensions and unease about the ‘Other’.

Venue: Initiatives of Change UK, 24 Greencoat Place, London, SW1P 1RD. (Click here for more directions on getting to the venue)