UK government should withdraw its invitation to Abdel Fatah al-Sisi 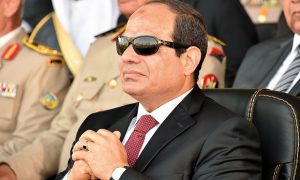 We are concerned to hear that the government has invited the Egyptian dictator, Field Marshal Abdel Fatah al-Sisi, to visit the UK. We believe it violates the British values which the government claims to champion to welcome a ruler who has overthrown an elected government and instituted a regime of terror which has thrown back the cause of democracy in Egypt and the wider Middle East many years.

While not necessarily supporting deposed President Morsi or the policies of his Freedom and Justice party, we note that he was democratically elected, and that his removal from office was effected by means of a military coup led by Sisi.

Since then Sisi’s military-directed regime has massacred thousands of civilians. Hundreds of supporters of the Muslim Brotherhood, including President Morsi, have been sentenced to death in mass trials that were a travesty of justice. Almost all independent political activity has been suppressed, including that of liberal and leftwing organisations. Women’s rights have been violated across the country.

Sisi was “elected” president in 2014 in a vote that did not meet the most minimal democratic standards. The parliamentary elections currently taking place in the absence of any real opposition have been shunned by the vast majority of Egyptian voters with record low turnout, in the expectation that the new Egyptian parliament will be no more than a fig leaf for Sisi’s authoritarian regime.

Meanwhile, security and police forces have illegally arrested, detained and tortured Egyptian citizens, media freedoms have been suppressed and many journalists arrested and abused.

Such renunciation of democracy and human rights has surely contributed to the upsurge of terrorism in Egypt, which we repudiate but regard as a consequence of, rather than a justification for, Sisi’s barbarism.

Under these circumstances, we regard any visit to the UK by this despot as an affront to democratic values. No considerations of commerce or realpolitik can justify such an invitation. We urge the government to withdraw it.