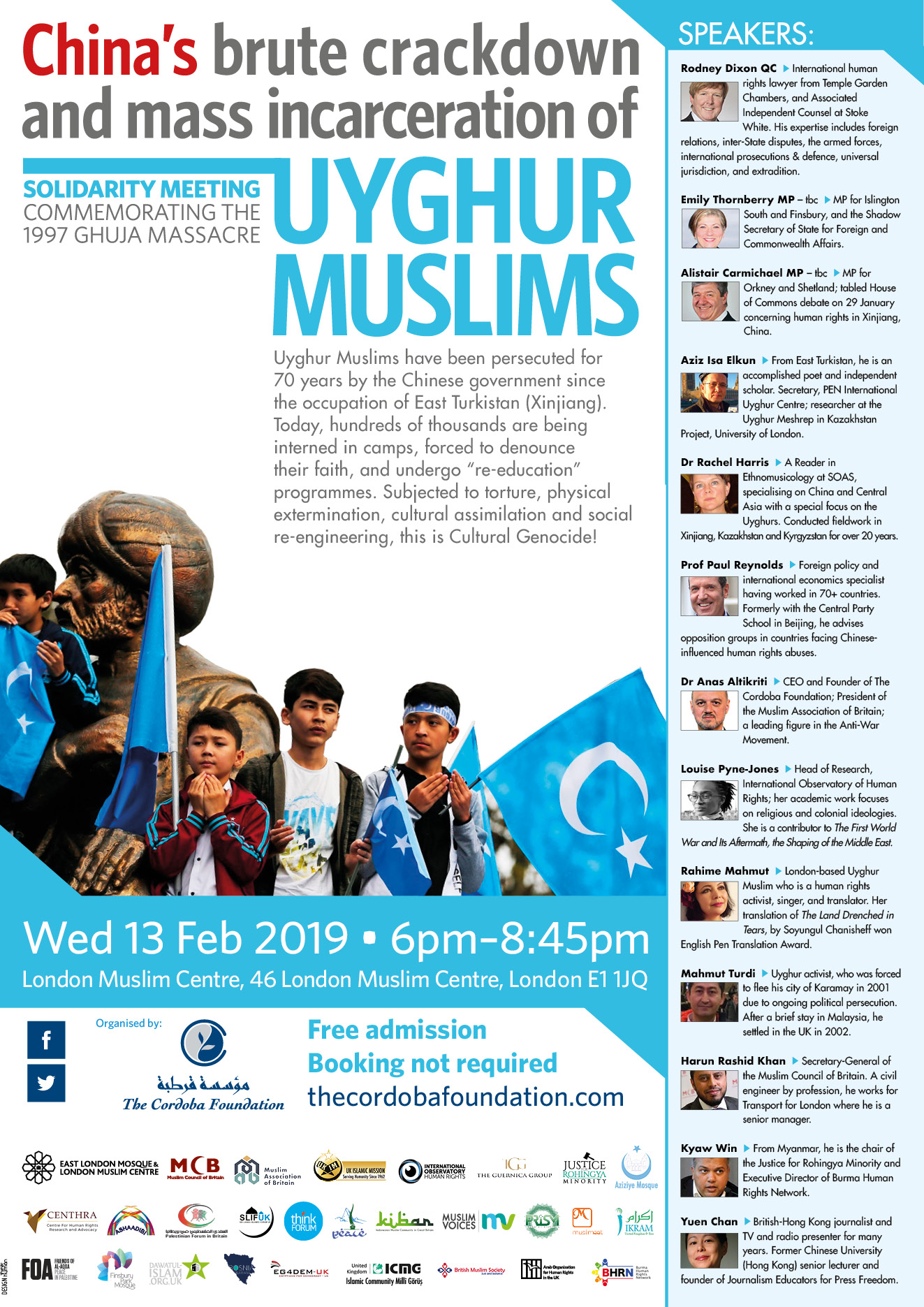 On the 13th of February 2019, The Cordoba Foundation hosted an event to raise awareness of the persecution of the minority Uyghur population in China, titled ‘China’s brute crackdown and mass incarceration of Uyghur Muslims’. Notable speakers, including leading academics, politicians, journalists, human rights activists and Uyghur leaders who fled persecution, drew a crowd of over 500 people at the London Muslim Centre (LMC).

“What has started from targeting extremism has morphed into targeting peaceful Uyghurs practicing their faith… There are hundreds of thousands facing systemic oppression and violence. For that to be happening today in the 21st century in a country with a permanent seat in the Security Council is abhorrent and can not be tolerated any longer.”

She concluded with a call to action, “it is time for us to say enough is enough and this should stop. Time to ensure the Uyghur people can practice their faith in peace. There is no them, there is no other, only us”.

Abdelkarim Zayyer, Uyghur scholar and Imam, opened the meeting with recitation from the Qur’an, this was followed by a welcome from LMC’s Director of Engagement, Dilowar Khan, who echoed popular sentiment amongst the crowd “We were hardly aware of this situation as it was rarely covered in the media…I hope we go away with more understanding and commit to do something about it.”

The persecution of the Uyghur population by the Chinese state has been relentless for over 70 years, however in recent years, especially since the rise to power of Xi Jinping, the persecution has intensified at an alarming rate. The Chinese government is systematically persecuting Muslims simply for practicing their faith. Over a million Uyghurs are currently being detained in “re-education” camps” (the term Chinese officials use for concentration camps), for simple crimes such as carrying a copy of the Qu’ran or regularly attending a mosque.

Several Uyghur nationals, forced to flee from China, spoke out about their experiences of living as a Uyghur in China. Rahime Mahmut, singer-songwriter and a human rights activist, stated that “accounts about torture are chilling and horrendous, people are kept in prisons for a year before being moved to concentration camps. One detainee who spent time in three different concentration camps said that many people he knew were forced to admit to making bombs in order to stop their torture”. The persecution reaches all sections of Uyghur society and the “re-education” camps are being applied to normal practicing Muslims. Rahime has not returned to China for the past 18 years in fear of her life. Similarly, Mahmut Turdi was forced to flee in 2004, and has not returned since, and has witnessed his siblings detained in concentration camps. He stated, “whoever is born with a Uyghur identity ends up persecuted… China is unwilling to protect our basic human rights; there is no justice and they have no fear”.

“Ever since the People’s Republic of China was established in 1949, we have faced persecution. However, the ascension of Xi Jinping has made everything worse with forced assimilations since 2016 and the building of concentration camps. Xi Jinping has placed a police station every 100 metres, and since 2017 we have been forbidden to make phone calls abroad”.

The recent escalation of violence against the Uyghurs has intensified under Xi Jinping’s reign for a variety of reasons and its causes are complex. Xi Jinping has difficulties with the Uyghur Chinese as he sees a problem of divided loyalties because of their religion. Professor Paul Reynolds, foreign policy and international economics specialist, elaborated that “if you look at it from a Beijing perspective, it will give you a psychology of the persecutions. It is a colonial project, with borders drawn by Chinese colonialists, similar to Middle Eastern and African borders. Furthermore, the reason why Xi Jinping has intensified his violence can be attributed to three main political reasons: Xi Jinping sees key vulnerabilities in the Communist Party. He needs growth to keep the country happy, he needs to address energy shortages and defence, and he is afraid of the US economy (China has a large US dollar holding of debt). To deal with these vulnerabilities, China wants to push its economic reach across the land mass, which ultimately means taking control of the Uyghur land, forcing migration from China into the area.”

Reynolds added, “The Uyghur area is also rich with natural resources such as oil, which is especially lucrative in the backdrop of a China which has difficulty importing natural resources and wants to develop its internal energy sources, with trade routes reaching from Afghanistan through the Uyghur lands. Xi Jinping has therefore come up with a six-point strategy to protect China’s power; weaken western objections to its crackdown on Uyghur Muslims; increase tourism to the Uyghur region; “re-education” of Uyghur Muslims; train Chinese in paramilitary organisations; and build three oil pipelines whilst allowing the West a share in this.”

Yuen Chan, British-Hong Kong journalist, TV and radio presenter, as well as a former Chinese University lecturer and founder of Journalism Educators for Press Freedom, stated that “The Chinese media is controlled by a vast and sophisticated propaganda machine, and it is hard to produce anything that delineates from the official narrative. Therefore, it is hard for the Chinese to gain any accurate picture of what has been happening. Many reporters have stated that they have witnessed the worst reporting conditions of the last 20 years and 96% of journalists in China have said that they have been visibly followed, with 90% forced to delete their data. Chinese news agencies have also been striking deals with the Western press in order to propagate their official story and keep the Uyghur crisis as China’s ‘dirty secret’”.

Rodney Dixon QC, international human rights lawyer from Temple Garden Chambers, explained that whilst there are many obstacles “it is important that legal avenues are pursued when they can be. It is critical to preserve the wealth of first hand evidence, which can be addressed to the General Assembly and the UN Human Rights Council”. He further added, “we must not think legal routes are closed, just because China has not signed up to any treaties”.

Louise Pyne Jones, Senior Researcher at the International Observatory of Human Rights, who is an expert on religious and colonial ideologies, stated that “the solution starts with dialogue, engagement and knowledge sharing. We can then take the debate nationally and internationally through media, NGOs and the government”. Practical tips for how to address the problem were given by Harun Rashid Khan, Secretary-General of the Muslim Council of Britain: “we should use social media and mainstream media to raise awareness… keep tweeting and keep talking amongst each other”. He also stressed the importance of Muslim organisations supporting members of the Uyghur community in the UK, and added “the damage caused by interning up to a million Uyghurs in “re-education” camps and increasing restrictions on religious practice and identity is magnified by the fact that coordinated responses from civil society have been too few and far between.”

Dr Anas Altikriti, CEO of The Cordoba Foundation, who moderated the meeting, explained the different aspects of the Foundation’s Uyghur Campaign and appealed for collaboration to address the desperate situation facing Uyghur Muslims. “It is truly unacceptable that an entire ethnicity of people are persecuted in the way that the Uyghur Muslims are. It is imperative that the British government takes its Chinese counterpart to task over this despicable policy and ensures that the Uyghurs are treated as citizens on par with their fellow Chinese citizens of all faiths, races and cultures.”

The meeting ended with a lively question and answer session.