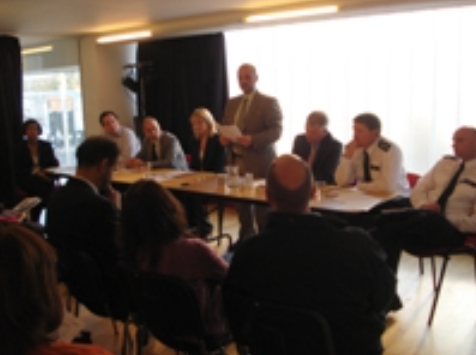 On the 20th of April, The Cordoba Foundation (TCF) facilitated a public meeting between the Hammersmith and Fulham Council (and related public service providers) and members of the Moroccan community, following the tragic murder of  17 year old Sofyen Belamouadden, a 3rd generation Moroccan  who was stabbed to death  in broad daylight in Victoria Station as part of a suspected gang ‘turf war’ battle.

TCF were invited by the community as independent facilitators to initiate a dialogue between the local authority and members of the Moroccan community who despite there being a large number living around North Kensington, feel that they are marginalised because of the ignorance about them, a fact that was further highlighted by one of the local authority officials who admitted he was unaware of the numbers.The meeting which was mainly attended by mothers (including the family of Sofyen) voiced concerns about the safety of the youths on the street.

Mothers repeatedly echoed the view that ‘they were not comfortable when their children left home because they were not sure whether their children would be stopped by the police or be attacked by gangs’.Members at the meeting highlighted the following as key concerns for them:

1)  Children of Moroccan origin are over represented in the youth criminal justice system.

2) The current ‘Children & Young People Services’ were not adequate in meeting the needs of the young people.

3) The current extracurricular and youth activities were not accessible by the whole community thereby leaving youth with a lot of time on their hands and falling prey to bad elements.

4) A lack of communication between the authorities and parents due to miscommunications on both sides.

All this was leading to ‘a climate of fear in London’ according to one community outreach worker who urged ‘A government response to the problem even to the level of establishing an emergency response team to deal with the matter’.

Commenting on the meeting, the CEO of TCF Anas Altikriti said, ‘Meetings like this give you an insight into the issues faced on a daily basis by youth and their families.  Understanding the failure to address concerns of services for the youth are important because these are often some of the catalysts for extremist and anti social behaviour’

The meeting came up with practical steps that would be taken by the local authority and the community (with support from organisations such as London Citizens, Street, Al Mannar Centre) to bridge the gap of miscommunication and identify ways of meeting the needs of the community including setting up mentoring programs and establishing more liaisons between the police and the community.

What was particularly striking was that though some of the concerns raised were directly related to the Moroccan community they were also generic to other parts of London.