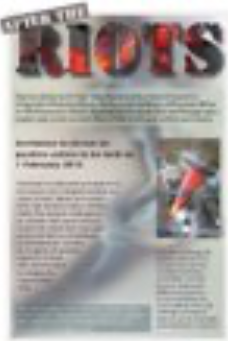 A former bishop to HM Prisons told a forum held in London that custodial sentences and bail provisions for some of the rioters of last August have been too harsh. Dr Peter Selby, formerly Bishop of Worcester and Bishop to HM Prisons, criticised a ‘system of disregard’ for the wellbeing of disenfranchised young people, which had led to the riots. ‘I am seriously worried that you blight somebody’s whole life for one night of foolishness’ by handing down prison sentences for minor crimes, said Bishop Selby. With 1,400 people in the system still awaiting prosecution and sentencing, ‘there are real grounds for concern. The punitive response to individual rioters, resort to constraint and control and the use of prison disproportionately for the poorest add to up a system of disregard’ for their and society’s welfare, he said.

He was speaking at a conference on ‘After the riots: from blame to positive action’, held at the Initiatives of Change centre in London on 1 February. The forum was organised jointly by Burning2Learn leadership training programme for young people, the Civil Society Forum, The Cordoba Foundation, and Initiatives of Change. It brought together some 100 community and faith leaders and representatives of non-governmental organisations from London, Nottingham, Manchester, Wolverhampton, Glasgow, Ipswich and Norwich.

Welcoming participants on behalf of the organising committee, Don de Silva, Head of Programmes at IofC UK, said the event would be a listening forum. He continued: ‘Many of the individuals here have hands on experience in dealing with critical issues, such as social exclusion, family life, youth offending and community cohesion. The forum aims to bring the values dimension into the riots debate. It will provide a space for dialogue. We will avoid any points scoring. We hope that the forum will encourage everyone to start with themselves, look at their own responsibilities, not just that of the others. We need both personal and systemic change to make a lasting difference.’

The event was kick-started with a short presentation by a group of young people from Croydon, Wolverhampton and Kent. Seventeen-year old Maria said: ‘It is fairly obvious that what has happened has had some really damaging and lasting effects on the persons involved; those who took upon themselves to vandalise and steal and shouldn’t be allowed to get away with it. Do we really have the time to be processing each and every case? Surely, our time would be more productively used ensuring that it doesn’t happen again.’

Clasford Stirling, a community leader from the Broadwater Farm estate in Tottenham, told the conference that ‘the system doesn’t provide for young people. We have four youth groups to deal with 100,000 people. It can’t happen. We need 20 youth clubs.’

The rioters had come together in protest against the police following the shooting of 29-year-old Mark Duggan in Tottenham on 4 August. At first the rioters found it ‘a sense of fun. The looting came afterwards. When you are having fun you don’t care.’ That fun had criminalised them. Politicians hadn’t always obeyed the law either and ‘the rich get richer because they steal’. Describing himself as a disciplinarian and ‘a serious dude’ loved by his children, Stirling admitted that some parents didn’t impose enough discipline.

Dr Selby criticised ‘a system of punitive attitudes’ that disregarded what effect this would have on the welfare of young people and the future of society. He contrasted this with ‘individual acts of over-indulgence at the top’ by some bankers and politicians who ‘bent the rules to their own interests’ and were resistant to regulation and control, and which ultimately led to ‘attacks on the lives of the poor’.

Emphasising that he was never in favour of rioting, Dr Selby said the riots were ‘the result of the economics of disregard that we have all created’. There was a need for systemic changes. ‘I don’t believe that the world will become a better place only by people becoming better people,’ even though this was essential from a Christian perspective. ‘I incline to a systemic view of things.’

‘Individual acts of looting and robbery, resistance to authority and, ultimately, violence against persons add up to a system of disregard,’ which had marginalised too many young people, he said. It was important that we attune our consciences to ‘a moral universe’. ‘If you propagate a system of disregard you are acting outside the guarantees of a moral universe. Last August was a call to live for a system of regard.’ Charlie Ryder, a musician, actor and former prisoner, told how he had served eight months in jail for taking part in a violent demonstration outside a BNP bookshop in 1993. His father’s drinking had had a bad effect on his upbringing, he said. He told the forum that young people needed a sense of forgiveness and healing to retain their sense of self-worth. He now works with the chaplaincy at Wormwood Scrubs Community Chaplaincy, and has collaborated with the Forgiveness Project.

Maxine Cockett, a community leader from the St Ann’s district of inner-city Nottingham, told how she had been part of earlier riots in the 1980s. When the riots of last August reached Nottingham, she urged the rioters to go home before the police found them. ‘We can do something positively,’ said Cockett, one of the organisers of an annual ‘Holding Hands Around St Ann’s’ demonstration of community unity. Every generation needed opportunities. Too many young people leave school at 14 ‘with no stake in their communities’. Greg Davies: ‘The problem with youth clubs is that they are She wanted to work together with others in the community to ‘find solutions’ so that young people are not marginalised and don’t riot. ‘I hope there won’t be any more riots. But I wouldn’t be surprised if we have riots again,’ she said.

Greg Davis, founder of the United Estates in Wythenshawe, Manchester, spoke about the inner-city cultural community centre, which helps to ‘foster a sense of belonging, education and training’. The problem with youth clubs is that they are ‘nice places’ for ‘nice kids’, he said. ‘The kids who most need the support of a youth club are the ones least likely to go. There are issues of class, ethnicity and gender. They need youth clubs for kids who don’t go to youth clubs.’ In the previous generation, traditional figures of respect were teachers, parents, police and faith leaders. Now they faced abuse from kids. ‘Those who can relate and garner respect are now more likely to be sports coaches and dance teachers.’

Ian Montague from the grassroots Glasgow charity FARE (Family Action in Rotherfield and Easterhouse) told how he had grown up in the Gorbals slum area of Glasgow. It had ‘the worst housing project with razor gangs’ and there was a lack of hope and vision, he said. As a teenager he had thought, ‘I can’t change them but I have to do something. Am I my brother’s keeper? Yes!’ Going into education, he launched a community newspaper ‘to irritate those who should be doing something’. Twenty years ago, the Council gave six flats to use for a youth project. The young people took  responsibility for this space.

Eighteen months ago the entrepreneur Duncan Bannatyne, of the Dragon’s Den TV series, contributed. They now had assets of £2 million. ‘There is money and there is room!’ commented Montague. ‘We have to find who has got it!’

Mason West, from Alabama, Tennessee, represented EYES (Engage Youth Empowerment Services) in Wolverhampton at the forum. Colour, caste and religion were used as reasons to divide, he said. ‘We need resources to pull together’ and invest in youth, ‘raising their expectations, empowering them, giving them confidence, helping them to find their voice and engage. Once they are plugged into the system they can change it. Then there’s no need to worry about them being radicalised or rebelling.’

Ann Edwards, from the Suffolk village of Wenhaston, said that Suffolk has many of the most deprived areas of the country. ‘Regardless of whether you live in the town or the countryside, how can you engage to make a difference?’ she posed. The villagers had safety concerns about children skateboarding on the main road through the village. Residents located an unused area where they created a skateboard park for the children. This gradually developed to accommodate the needs of the community. £144,000 was raised for a new sports complex, which has tennis and skateboarding facilities integrated for all ages and backgrounds. They also revived a youth club. There has been almost no vandalism as it was very much a community generated project in which everyone took pride. ‘Small, simple ideas can have a big impact on the community,’ she said. Her personal inspiration had come from ‘taking time for quiet reflection every morning, listening for direction and seeking inner peace’.

Closing the forum, Anas Altikriti, Chief Executive of The Cordoba Foundation remarked: ‘What we have learnt today is that the greatest resource and asset we have is people.  Society leads us to believe that it is money – stuff – that matters but what really succeeds is a project that places its worth on people and their work. This is the message that we give to the young people today. All of us can make a change. All over the world, we see the resurgence of the youth as a force to transform society. In the Middle East, we were told that young people were lazy and indolent, yet they have been at the forefront of the Arab Spring. Likewise, we tell people here that it is the spirit, endeavours and courage of the youth, that can shift paradigms, and they need to be supported’.

A young rioter commented afterwards: ‘I did not know that there were many people who cared and listened to people like us. This event is a rebirth for me.’

For The Cordoba Foundation thoughts on this issue, please click here

To read the conference report and recommendations, please click here