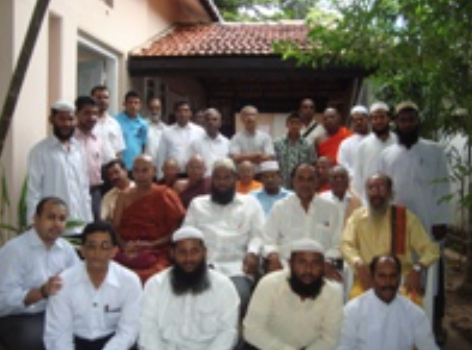 The Cordoba Foundation (TCF) has been working for the past 6 years in a consultation role with various stakeholders in Sri Lanka.  More recently, it has developed a working relationship with the North East Interfaith Forum (NEIFR).

The North East Inter Faith Forum (NEIFR) is a new group that has been set up in the aftermath of the conclusion of Sri Lanka’s 30 year old conflict by religious leaders (from all of Sri Lanka’s main religions) to identify the positive role that faith leaders can play in post conflict reconciliation.

The Forum believes that spirituality and common human values founded and strengthened by the different religious teachings can be used as a force to foster inter-ethnic relationships and promote inter-ethnic understanding and social cohesion.

The Forum is calling for a space in order to discuss and develop solutions to problems affecting the community and are calling for the support of faith based diplomacy which involves the follwoing:

* developing a committee of consciences to advise the local and national government on human rights, resource access and allocation of natural resources

* community steering groups who will take their own development into their hands.

The Cordoba Foundation along with the Mahatma Ghandi Centre, worked with NEIFR and religious leaders on the  4th of January 2011 to plan itheir work programme for the year.  Amjad Saleem, Head of Communications at TCF, presented models of interfaith reconciliation from other countries as he facilitated some of the discussions.

At the end of the meeting, religious leaders made a declaration to share with the rest of  the country, NEIFR’s conviction of bringing spirituality as an arbitrator in all future dealings, and as a means to ensure that no one in the country is marginalized on the basis of religion, race, caste, class, wealth, territory etc.

The NEIFR also reiterated need for the establishment of a National Committee of Conscience as an advisory body for the governments and setting up of village development committees with an oversight from the religious dignitaries in the area for ensuring trust and better accountability in all public affairs.