News Item: Call for Action from the Parliament of Religions 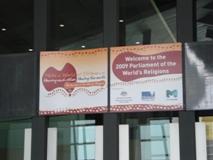 On closing the World Parliament of Religions on the 9th of December after 6 full days of deliberation, discussion and celebration, The Dalai Lama challenged the participants to put what they had discussed to action.  In order for love and compassion to become a reality, he said that there would need to be a new type of ‘secularism’ – not a secularism that denies the importance of religion but one which respects the practitioners of all religions and of none.

‘Beliefs may differ, but the core practices of love and compassion are common in all traditions’ he concluded.

The Dalai Lama’s comments put an end to a highly successful gathering where the theme was on coming together despite differences to show unity in common challenges.  That unity was displayed with a gesture of solidarity with the United Nations Climate Change Conference in Copenhagen and also showed solidarity with representatives of indigenous people from around the world.  One of the main discussion points throughout theParliament was an Islam 101 series which focussed on improving people’s understanding and perceptions of Islam.  The series featured contributions from Professor Tariq Ramadan; Dr Chandra Muzzafer; Imam Faizel Abdul Rauf; Imam Khalid Griggs amongst other leaders and civil society activists.  TCF also featured prominently in the Parliament sitting in on 4 panel discussions.

For more information on the Parliament’s events, please click here