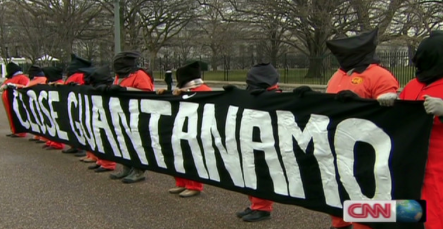 On 11 January 2002, the first of nearly 800 prisoners was sent to the US military prison camp at Guantanamo Bay.  Images of these men kneeling and shackled, wearing orange boiler suits, goggled and masked, shocked the world.  Ten years on, 171 prisoners still remain in captivity – all without due process and without a feasible end to their suffering in sight.

The Cordoba Foundation (TCF) strongly believes that ten years on, the presence of such a prison is a shameful blot on the annals of international justice and human rights.History will read that we stripped innocent men and women of their dignity, imprisoned children and practiced torture.

Remarking on this, the CEO of TCF, Anas Altikriti stated: “At a time when the world is witnessing a sea of uplifting change throughout some of the darkest spots in living memory in what has come to be known as the Arab Spring, it is disgraceful that Guantanamo and all that it symbolises continues to exist under our very noses and with our consent.”

The Cordoba Foundation calls on the United States Government to bring an immediate, unequivocal and unconditional end to this shameful episode, and calls on all peoples and nations of the world to assume a solid stand against such practices, wherever they occur, for whatever reason and by whomsoever.

The Cordoba Foundation is supporting a conference to commemorate  this issue.  Please click here for more details