The Scourge of Islamophobia in Britain 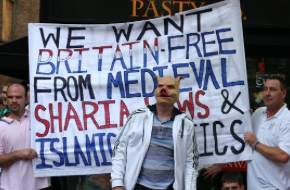 With the issue of extremism being at the top of the political agenda, never has it been more important to highlight the issue of the Far Right in the UK as a socio-political phenomenon, and to consider its wider and deeper implications on British society as a whole.

With government’s CST Bill to becoming law, police and security forces will be granted extra powers and more and more sections of society will feel the brunt of the implications of these new measures, leading to the risk of polarisation and demonisation increasing substantially. Hence, the challenge facing government and security authorities is to be seen to be even-handed, measured and consistent.

It is true that every group of people has its broad spectrum of ideas and stands, ranging from the right to the left, with manifestations of extreme ideas on both sides. However, it is also commonly true that those extremities represent a small minority that is usually ignored by the overwhelming majority occupying the mainstream of the spectrum. Whenever the extremes succeed in dictating or influencing the mainstream narrative or political stand, it’s a sure sign of failure on behalf of the masses.

And whilst, the Muslim community has constantly expressed willingness to act in confronting all forms of extremism within its midst, the question that always emerges from among British Muslims is on the Far Right, and why it is that they are often seen to get off easily despite what they see as clear extremism, whether verbal or physical emerging therefrom. It is often a mystery to most how prominent members of groups such as the EDL, Britain First and the BNP could escape prosecution despite their vitriol of a racist, discriminatory and inciting nature. The impact of this is further alienation of young Muslims, and an increased sense of being undermined and marginalised on the part of the community as a whole, leading to gaps and schisms which extremists and terrorist can exploit.

The worrying feature is that whilst one might expect groups on the extreme right to produce racist statements that appear to incite hatred and even violence, some of the groups have become acceptable elements within the spectrum of political discourse in modern-day Britain. The implication for British society as a whole on the short and long terms could be devastating, let alone on various ethnic and faith communities within society. Even more worrying is the apparent pandering of mainstream politicians desperately searching for floating votes, and believing that those are to be found on the right of British political narrative. The fact that such attempts proved worthy to some, threatens the very concept of co-existence and tolerance, let alone future security and prosperity within British society. As a result, Far Right groups only have to point to any one of the litany of public statements made by ‘mainstream’ politicians, journalists and public figures, to prove that they are by no means alone, isolated or even in a minority in expressing sentiments, which either feed into the racist narrative, or actually represent it.

Little doubt that the media plays a crucial role in drawing the parameters of public discourse, and it is when addressing the hot issues, topical themes and/or emotive subjects that this role becomes ever more important. Sadly, the overall impression of British media – noting some outstanding exceptions – is that rather than confronting and rejecting extremist narratives which emanate from the Far Right, it has largely played host to those lines and often provided a platform from which they have easily proliferated enjoying the false guise of reasonability and acceptability.

Governments also have a role to play which is not being fulfilled. Besides the need to understand the realities and implications of Far Right politics, racism, Islamophobia and extremism, much more responsibility needs to be shouldered regarding the stands and the statements made by politicians, and especially those who represent government. Of late, stories such as the Trojan Horse saga, which turned out to be a near figment of someone’s overactive imagination, and more recently the push to get the CST Bill passed, are not only adding to the feeling of marginalisation and demonisation among British Muslims, but are encouraging the Far Right and affording those players credibility and legitimacy which is far from deserved.

As such, The Cordoba Foundation embarked on this project in an attempt to dissect the Far Right, identify its various strands, the respective tactics employed, the funding sources, the primary figures and the overall aims and goals, for the sole reason that this element of British politics and society be more understood and countered.

The Spectre of Hate: An Examination of the Far Right in the UK, the third installment in The Cordoba Foundation’s toolkit series after the Media and the Lobbying and Campaigning guides, is an important insight into one of the pressing issues of our times, with an emphasis on the practical rather than the mere theoretical. It is an important examination of the roles of a number of players, including the government, the Muslim community, and wider British society, and how the various strands of the media have contributed towards this phenomenon, whether positively or negatively.